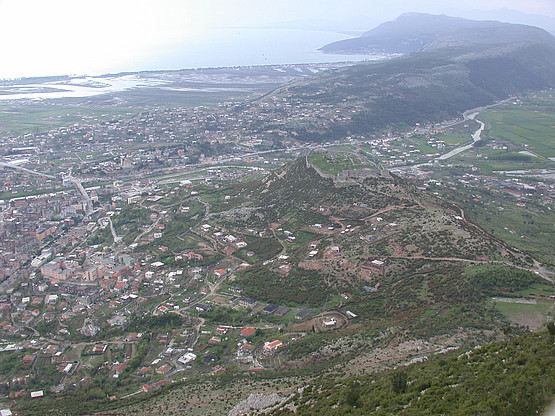 A collaboration with the Albanian Institute of Archaeology has allowed an Austrian team of the Institute of Archaeology, University of Graz to set out to make trial excavations between the 15th and 27th of April 2004 on the site of the ancient city of Lissus (today Lezha) in Northern Albania. The project was directed by Gëzim Hoxha, assisted by Luan Përzhita. The Austrian team, which was directed by Erwin Pochmarski and Manfred Lehner, is obliged to six students of the University of Graz for the great engagement and efficiency they showed within more than 800 unpaid hours. Four Albanian students completed the Albanian-Austrian excavation team.

The first season 2004 at Lissus saw two small excavations in the area of the ancient town and a short survey in the city and its surroundings (on the hill Mali e Shelbuemit) to get a general view of the topography of ancient Lissus (fig. 1) and in advance of possible future projects. Of course two weeks are very short for excavating two different sites and studying and processing the huge quantities of finds; nevertheless the results are worth mentioning. 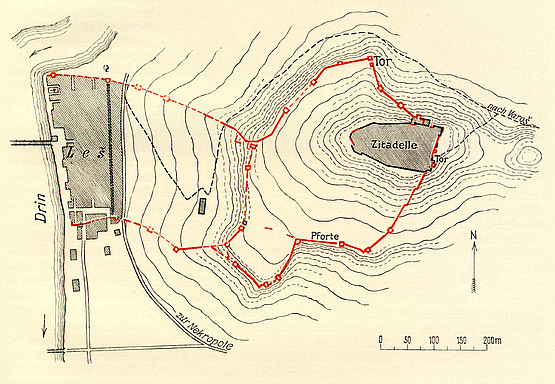 The town of Lezha, known as Lissus in Classical times, was build along the banks of the river Drin (Drilon) including a small hill (= Akropolis, 172 m above sea level), which was used as a fortress. Lissus was an Illyrian settlement. Ceramics from the hill Mali e Shelbuemit, which lies east of Lissus (= Akrolissos, 410 m above sea level) suggest an Early Iron Age date (8th century BC) for the hillfort on Akrolissos. The fortification system of Lissus with its towers and walls, which enclose the Akropolis and the Lower town, was built in the 4th century BC, incorporating earlier walls of the 6th century. According to Diodorus Siculus (15,13) Lissus was founded as a Syracusan colony by Dionysios I in 385 BC. Polybios (8, 15. 16) describes the siege of the strong fortress during the First Macedonian War in 213 BC, providing a good description of the ancient site. The city seems to have had an important seaport (Nymphaeum, today Shëngjin), as proofed by Caesar (civ. 3, 26-29). In Byzantine and Ottoman times the Akropolis continued to be used as a fortress.

As the fortification of Lissus is a magnificent and well preserved example of ancient military architecture, it has attracted scholars for a long time. The first mapping of Lissus is due to the Austrian scholars Camillo Praschniker and Arnold Schober, who, reaching Albania from Montenegro, travelled as far as Fier and Berat during the First World War. (fig. 2) Their investigations and accounts of many archaeological sites in Northern and Central Albania were published in 1919: C. Praschniker – A. Schober, Archäologische Forschungen in Albanien und Montenegro, Schriften der Balkankommission der Akademie der Wissenschaften in Wien, Antiquarische Abteilung 8 (1919).

In 1979 the old village of Leš/Lezha, situated on top of the Lower town of ancient Lissus, was almost completely damaged by an earthquake. (fig. 3) After removing the dumps and ruins of the buildings a modern residential quarter was build on the northern part, while the southern part of the Lower town was changed into a National Park including a section of the ancient fortification and the memorial place of the Albanian national hero Georg Kastriota – Skanderbeg, who was buried in Lezha on the 17th of January 1468. Lezha was an important fortress for him, who had formed the Albanian League here on the 2nd of March 1444. The memorial place, a protective building in the form of an ancient temple, encloses the ruins of the former church of St. Nicholas, later turned into a mosque, which was believed to contain Skanderbeg´s grave.

During the removal of the dumps parts of the ancient fortification were revealed, representing the Southwest corner of the ancient Lower town. Frano Prendi, who had worked in Lissus before the earthquake, set out some excavations in the early Eighties, uncovering the West gate (the Harbour gate) and the well-known Southwest gate, a fine example of an Hellenistic gatehouse with double towers on both sides. In 2002 Gëzim Hoxha commenced to take up the investigations in the Lower town of ancient Lissus again.

In the course of the recent joint Albanian-Austrian investigation two sites in the Lower town were investigated, which had been partly excavated by Gëzim Hoxha and by Frano Prendi in the previous years (in the following named Area A and Area B, see fig. 3). By cleaning and thorough documentation of these sites it was possible to clarify the relative sequence of the different phases of the buildings and to get first clues of dating even without moving a mass of earth. 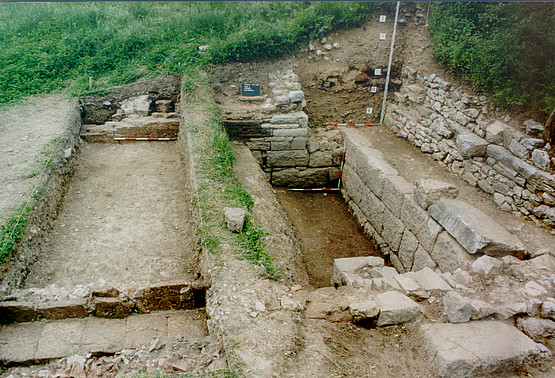 The excavation site Area A lies right north of the Skanderbeg-memorial at the foot of the slope rising to the Akropolis. By means of a small new trial section and removal of the modern rubbish on top of the walls revealed some twenty years ago, it was possible to establish a chronological sequence of the wall structures. (fig. 4. 5)

A supporting wall M6, built of big square stones in isodomic masonry, turned out to be the oldest structure. It lies in line with a street coming up from the Southwest gate. The relation between this street and wall M6 is disturbed; the pavement of the street has been torn out just before it reaches the wall. There was not enough time to take away the modern sediment there and to clarify the situation. Genuine layers for dating wall M6 have not been reached; it may go back to the Hellenistic period.

The second phase consists of a building formed by the foundation wall M9, made of reused square stones and the upstanding walls M1/M3 (north) and M7/M8 (south), both made of bricks in their straight parts and well-finished flat square stones on the corners. The surface of layer 16 shows a small fireplace 16a along wall M7, thus marking a genuine living-floor of the second building phase about 3,40 m above sea level. Layer 16 has not yet been removed, but may date to the Roman Imperial period. Layers due to the construction of the building have not been reached.

In the Late Roman period the northern room of the building (formed by the walls M1 and M3) was divided by wall M2. This wall shows a weak foundation and comes along with a burnt layer 8a, which yielded a coin of the 4th century AD. The same date is suggested for the mixed-masonry walls M4/M5 in the eastern slope. M4 stands on top of the corner M7/M8.

These building activities of the third phase were finished by levelling the thick layer 10, bringing up the Late Roman ground floor to 5,40 m above sea level. Layer 10 contains a huge amount of pottery from the 4th century BC up to Late Antiquity, mostly fragments of transport amphoras, which fit perfectly for the Lower town as a commercial quarter at the river port.

M5 shows an entrance, almost two meters wide, which was closed with an irregular dry stone wall M5/2, representing the 4th phase (Middle Ages ?) of building activity within Area A so far. 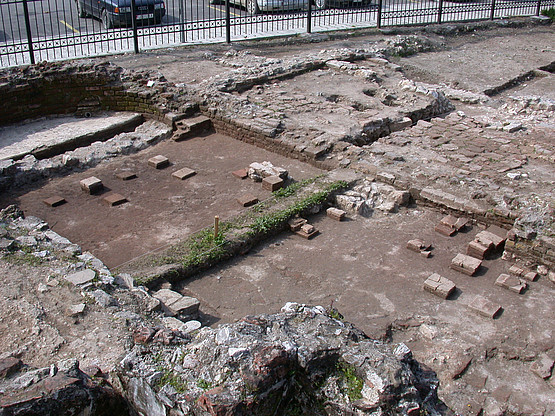 Area B is situated right outside the Southwest gate of the ancient Lower town. The building, obviously modified several times, is not parallel to the city wall. Its north-western corner is built towards the western tower of the Southwest gate in an angle of about 30°. The main structures of the building were already unearthed some twenty years ago; in 2004 it was cleaned and redrawn; excavation was only applied to the most eastern room (room 1) and to a narrow section cutting the middle and western room (rooms 2 and 3). (fig. 6. 7)

A first phase of the building is represented by the irregular stone wall M18, which is clearly younger than the city wall. Further investigations are necessary to find out date and shape of this building.

The walls of the second phase, mainly made of brick masonry, are partially erected on top of M18. The new building consists of three rectangular rooms of 27 m2. The eastern room 1 has a square extension in the north and an apse in the south, which shows brick-made opus reticulatum on the outside. The western room 3 (incompletely drawn in fig. 7) has a northern square extension as well; if it had a southern apse, too, is uncertain because of a modern fence crossing the site; maybe the building originally had a symmetrical ground plan.

Room 1 has hypocausts, heated from a praefurnium in the northern extension. The square brick pillars stand on a brick floor 12/13 2,95 m above sea level. A coin of the Roman emperor Claudius Gothicus, found in the rubble of the hypocausts provides a terminus post quem of 270 AD for the end of the second phase of the building. The rubble layer also contained fragments of a black and white mosaic, showing that room 1 once had a tessellated floor. Remains of a white mosaic, covered with chalk-sinter, and a drain tube give evidence of a water basin in the southern apse. Thus, the building of the second phase can be interpreted as a small bath of the Roman Imperial period. Room 2 and 3 shared a joint mortar floor 9/27, lying at 2,85 m above sea level. Conditions are heavily disturbed by modern features in room 3.

In room 2 a very irregular floor 2 (3,30 above sea-level), made from the broken tiles that once covered the hypocaustum, and a coarse wall M6 dividing the room mark the third phase of the Area B-building.

In the Late Roman or Early Byzantine period the edifice was completely rebuilt: a line of three square pillars M5a-c, in a distance of 4 m from each other, divides the building from west to east. They go together with the coarse stone-walls M12 and M15, which have a joint foundation trench 22 in room 1. The eastern wall of room 1 was opened with an apse (level of terrazzo floor 3,80 m above sea level), the gap between the northern extensions of room 1 and 3 was closed (wall not drawn on plan fig. 7).

All these building activities – pillars for a vault, an eastern apse, a rectangular ground plan instead of the complicated symmetry of the Roman bath – together with scattered human bones in the covering layers give evidence for the Area B-building being changed into an Early Christian church in its 4th phase.